The Cleanup at the French Legation was a brilliant success! Here are some pictures of the play afterwards. 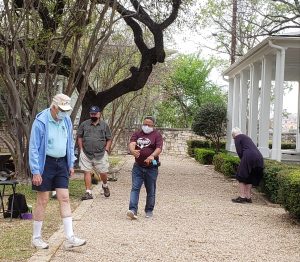 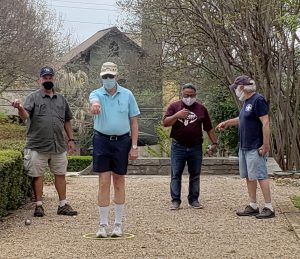 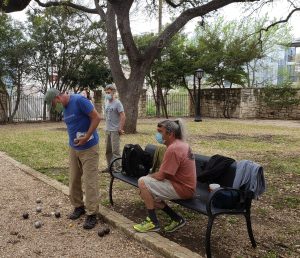 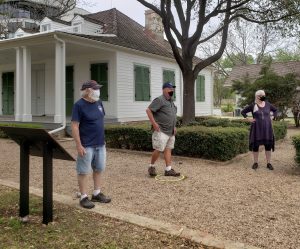 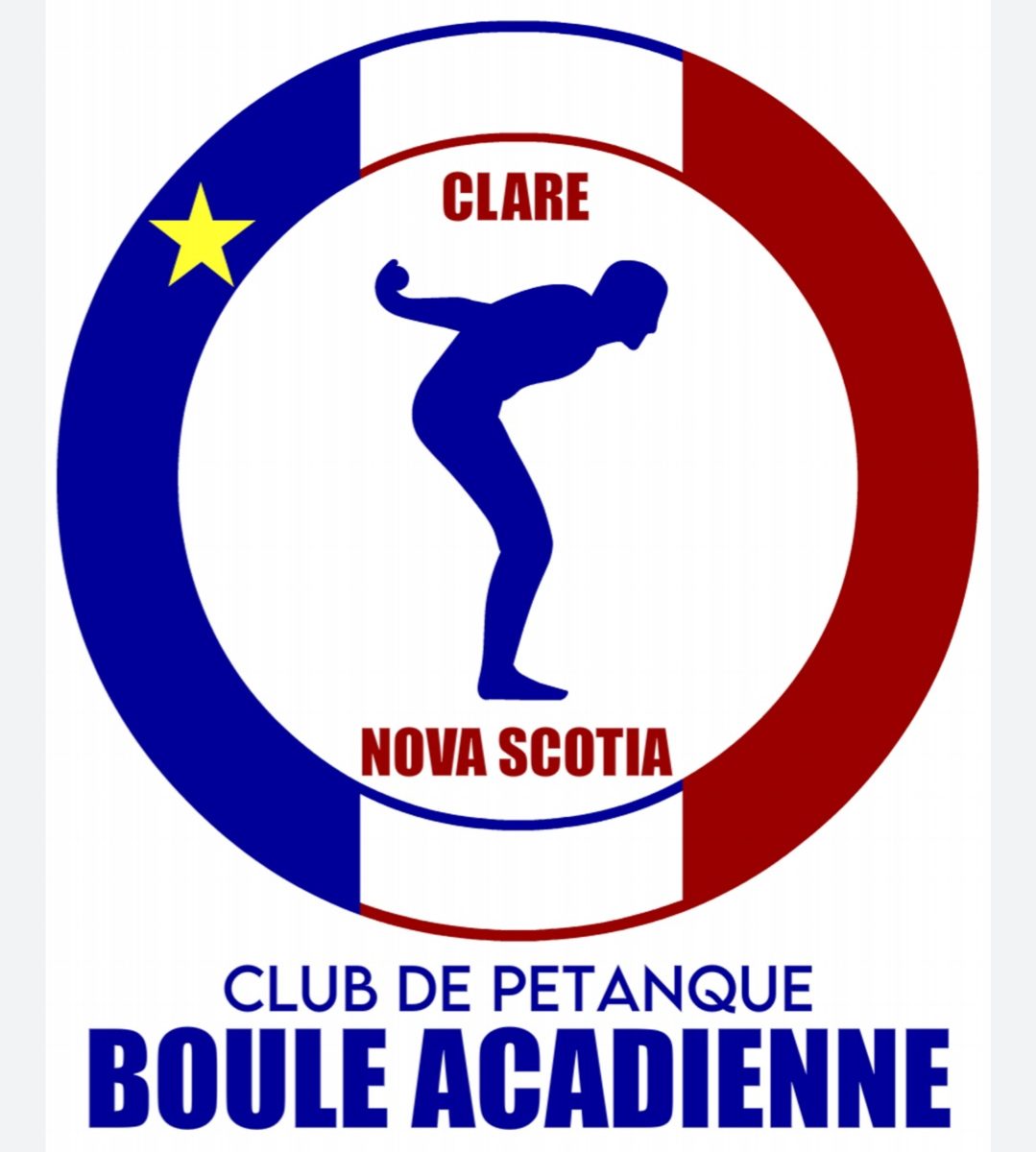 The Boule acadienne now has a five-member committee formed during its first meeting on October 20, 2020: One president, one vice-president, one treasurer, and two directors. While waiting for a first General Assembly, which should be take place before the end of this year, the new office ratified the official and legal declaration of the "Boule acadienne Association" to the Provincial.

The official club logo has been unanimously approved  by the five members present. It will be included in all of our publications as soon as technically possible.

THE 2021 MEMBER REGISTRATIONS ARE NOW OPEN to anyone from our community of CLARE and surrounding locations. Francophones or anglophones from adolescence to "silver-hair" age can join.

Pétanque (cousin of Bocce) is a festive and friendly boule sport suitable for everyone.

IT IS VERY SIMPLE TO REGISTER: Contact our administration by email: labouleacadienne@gmail.com

We will tell you what to do next.

Welcome to the Boule acadienne! Long live our pétanque club ...

I hope this finds you and yours healthy and well.  I did want to give you an update on last month’s progress.

The work on the French Legation is progressing very slowly.  Not a lot of headway has been made since my tour in May.

The project has been delayed by the modifications to the carriage house, as well as the Covid-19.

The carriage house addition will include a small kitchen for light lunches and drinks.

This addition will include three restrooms, a storage room, and a maintenance office.  The plumbing has been stubbed up and is ready for the final foundation work and concrete.

The main visual progress on the Legation building itself is the addition of the new four pane windows and new shutters.  The wooden stairs are being completed.

LBC is still hoping to hold our first tournament of 2020 at the Legation on Sunday, November 1.  Hopefully, construction on the French Legation will be completed at that time, and also the Coronavirus will be under control.

So save the date, Sunday November 1, 2020 .  Hopefully we have a tournament on the horizon. 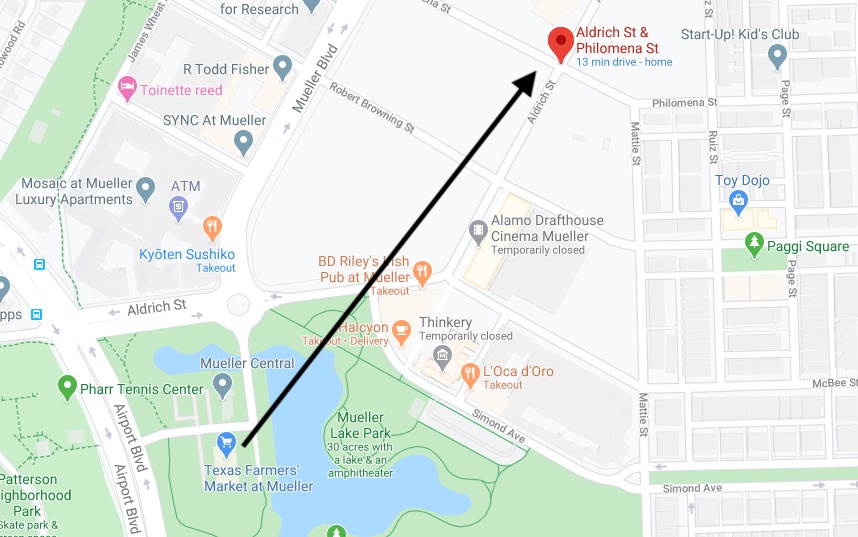 Long time no see! As far as I know, no LBC members have gotten Covid-19. Let's keep it that way!

The following is a message from Jim Schwobel:

I thought the LBC would be interested in what the latest Mueller newsletter is saying about the Farmers' Market's future move from the Browning Hangar to the pavilion at Mary Elizabeth Branch Park at the northeast corner of Philomena and Aldrich streets.

For the past several years, no estimate of completion date has been announced but this article goes so far as stating "end of 2020". My guess is that Covid-19 will delay that schedule.

Details can be seen at the Mueller Newsletter​

I've seen this written elsewhere for several years but it is still disconcerting that the article states  "The Hangar has always been intended to be used in some other commercial capacity that has not yet been determined."

Let's hope that effort is as slow developing as everything else.

​You can leave comments below. 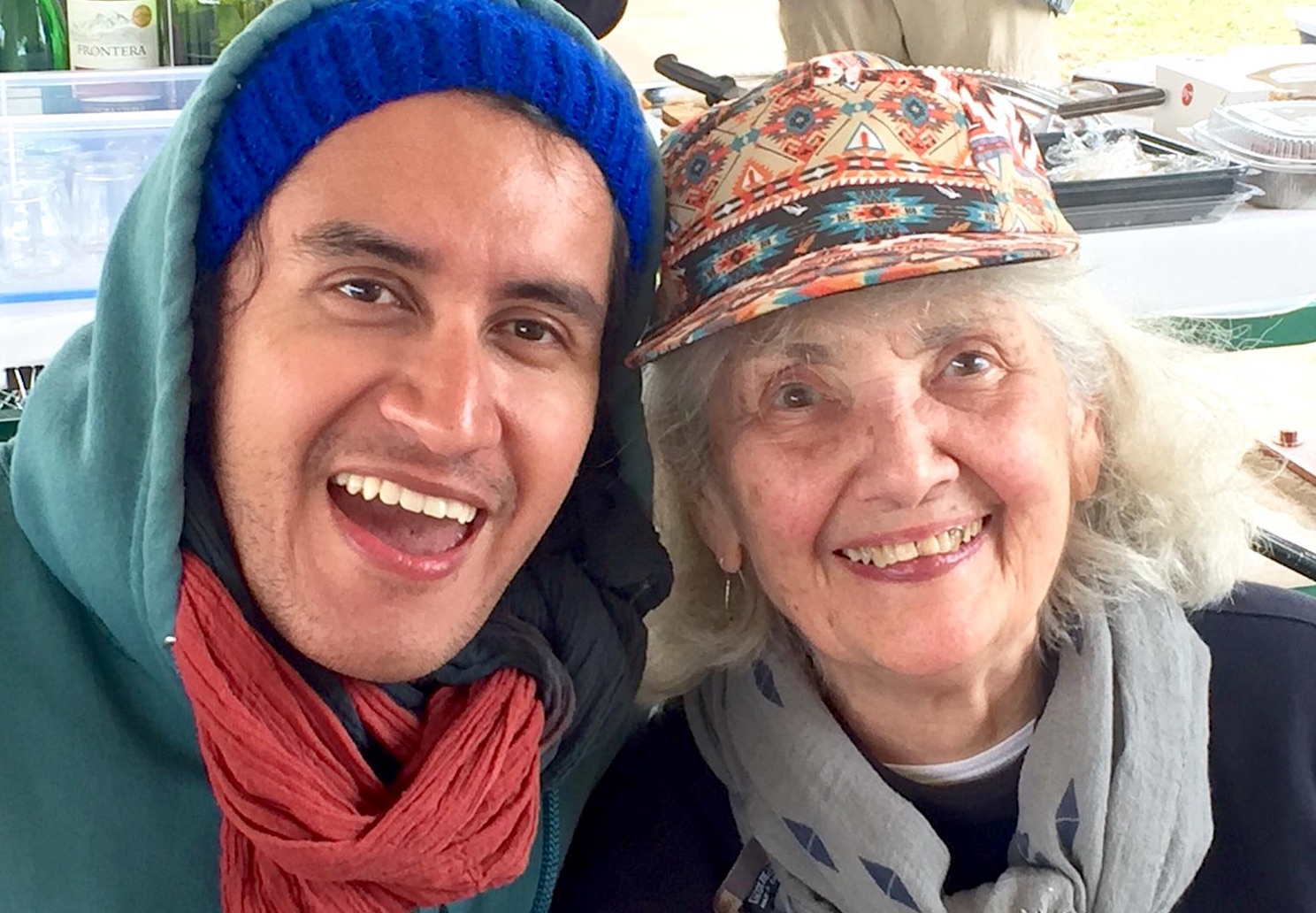 ​We hope you are all doing well and staying positive during the last few months.

​We will wait to see how the state/city re-opening goes prior to scheduling any LBC events.  Our next tournament is scheduled in November. Once the hangar re-opens, folks can coordinate their own gatherings and games but LBC will not announce any official play dates until we are sure it is safe to meet in large groups.

​Coordinating personal games via text, phone or Facebook/Legation Boules Club may be an option for organizing small games for now. Feel free to contact me regarding LBC updates.

​Ed Priest has an update on the French Legation:

The work on the French Legation is progressing, but July completion is doubtful.  The project is being delayed by the modifications to the carriage house.  This addition will include a small kitchen which will be providing a light lunch menu and drinks.

The addition will include three restrooms, a storage room, and a maintenance office.  Excavation for the addition is now under way.

The parking lot is completed and landscape installed.

The new stone work at the Embassy Road entrance is complete with new gates installed.

Work is continuing on the interior of the Legation.

Work on replacing the three pane windows has started.  To make the building more historically accurate, four pane windows will be used.

The Legation’s interior will not be furnished.  Instead, it will include a display about the history of the building at the time it was constructed.  There will also be other historical displays.

of the Dallas Pétanque Club:

(And the Legation Boules Club)

"Because of these sad times of being unsure when we can officially return to playing our beloved game of pétanque, I have a proposal...

To get the boule rolling, on behalf of Dallas Pétanque Club, I would like to invite all players from San Antonio and Austin, to Dallas for a Texas showdown on October 18, 2020!

If successful, it would become an annual event.

​Players can email me directly at menzina1@earthlink.net

​I trust all is well with everyone and I look forward to seeing y’all sooner rather than later.

END_OF_DOCUMENT_TOKEN_TO_BE_REPLACED 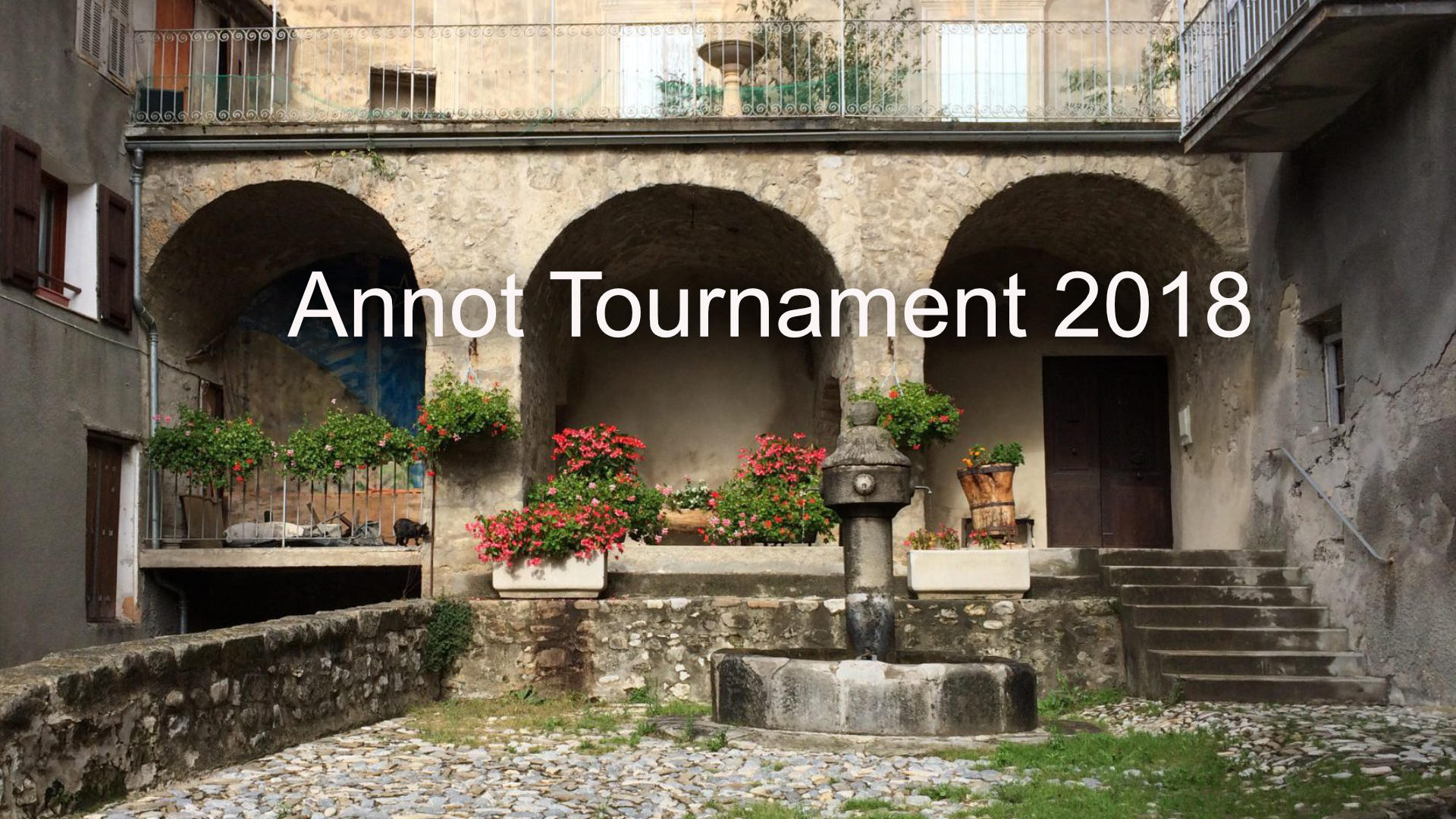 Several of the LBC member went to Annot, France to be in a tournament against the local players. Below is a video of the Meet and Greet event that took place the day before the tournament.

END_OF_DOCUMENT_TOKEN_TO_BE_REPLACED 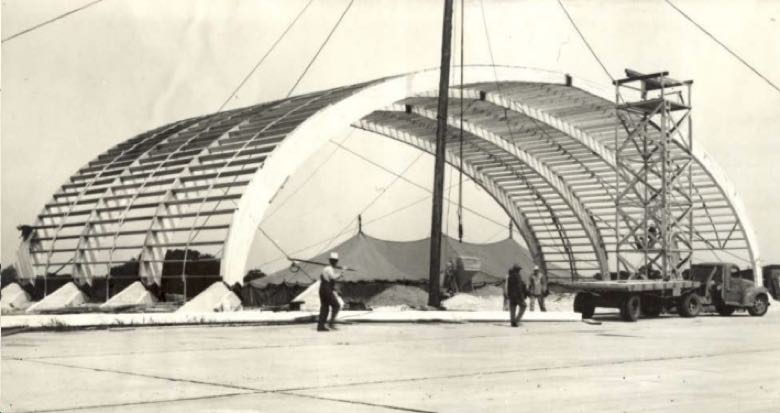 ​Here is some fun stuff from Jim Schwobel!

​You can leave comments below.

Here is a short story that I wrote for LBC. Perhaps it will serve as a moment's entertainment for the members during this extraordinary time in our lives?

Since we are all sheltering in place, only going out for groceries, I had the idea of creating an imaginary pétanque game that might serve as a substitute for actually playing. Perhaps it will help satiate everyone’s cravings until we meet again. Perhaps LBC members will want to add your creativity?

Speaking of grocery shopping…my last trip to HEB was over two weeks ago. I usually go about once a week but since we Americans have large refrigerators, that allowed me to buy a bit more of some items without feeling like I was hoarding. With existing items in my cupboard, I should be able to avoid shopping for another couple of weeks and with a little creativity, I can go a couple weeks more. However, near the end, I’ll be eating the small packets of ketchup and the jar of maraschino cherries that has been at the back of my cupboard for who-knows-how long. I don’t know how long because they came from an era before manufacturers had to include “best used by” dates in their packaging.

Back to the imaginary game…We were fortunate that there were exactly 6 of us at the Historic Browning Hangar on a Saturday night and we started with the usual sorting processes you know so well: placing 1 boule each and the cochonnet inside a circle. I wanted to avoid the usual cumbersome task of collecting the boules/cochonnet in my hands and tossing them – so I just kicked everything. Awful mistake wearing sandals. I broke my big toe and on the way to the ground, I caught the plastic ring with both feed and broke it in two places (the ring two places, my big toe one place). The damaged ring also struck the cochonnet, knocking it about 10 meters from the scattered group of boules so we had to find a long tape measure to determine relative boule distances and resulting teams. Time passed.

After the customary confusion of determining teams, caused by most of us picking up our own boule before finding our partners, some of whom had wandered off to the wine table, and which team would start the game, we decided to use the traditional coin flip. No one had any change in their pockets so we fanned out in the Hangar to search the ground for any coin lost at last week’s Farmers’ Market. Finally, a penny was found. This was the first (and time would prove, the last) good luck we had as you know, pennies are hard to see being of similar color to the crushed granite surface.

Let the game begin…On his first shot,  Amine’s boule broke in half so recognizing what an advantage it would be, my team insisted he play the rest of the game with the larger of the two halves. Citing some “official” rule we insisted was in the rule book and since no one had a copy of the rules, we won that debate. He continued to shoot better than 90% with that boule (piece).

On one end, Amine shot the cochonnet (with his hemispheric boule), and against all odds, the cochonnet broke in half! No one had a substitute cochonnet so we played with the Larger half because Marie-Claude’s dog found the smaller piece and promptly ate it. We wanted to take up a collection for the anticipated vet bill but as you will remember, no one had any change.

The game continued until mercifully, we were forced to relinquish the Hangar to the Farmers’ Market vendors who arrived to set up their booths. Yes, it was now mid-Sunday morning.

That’s my story and I’m sticking with it. You are invited to exercise your creative juices (mine have run dry) and add events to this imaginary game.

LBC members are encouraged to insert your own "recollections" of this game below. 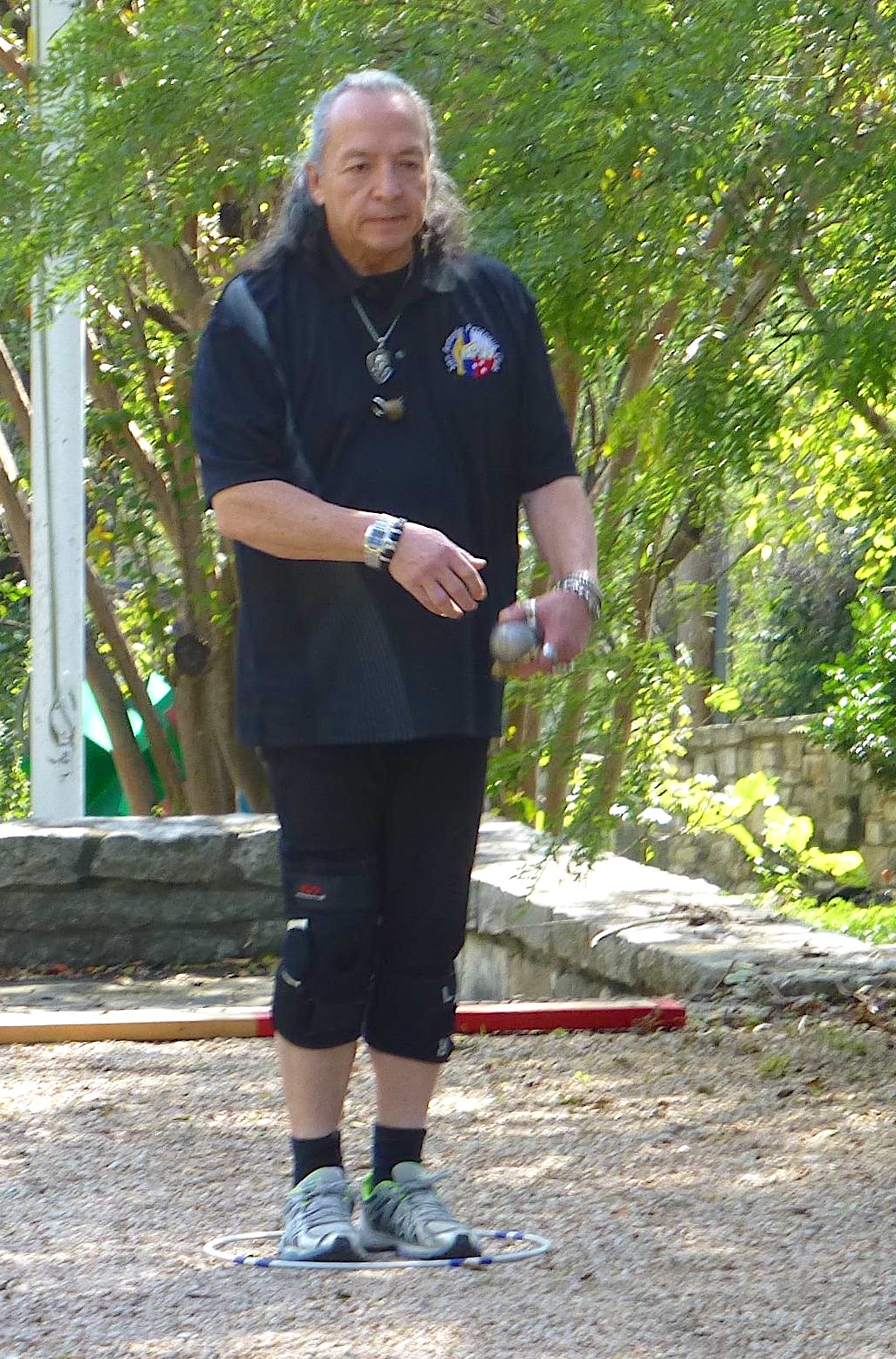